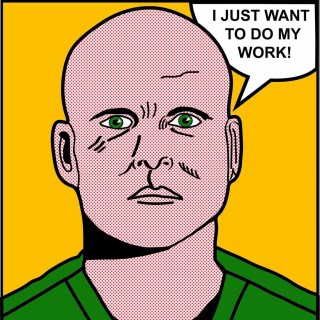 I am an academic Radiologist who uses comics to teach medical students and residents.

From today’s comics jam! I stole this idea from Lynda Barry. Students were given a piece of paper with 6 blank squares. I gave them the first word that they had to illustrate (Booger, still having some maturity issues) that they wrote in the upper left hand square. They then had one minute to draw a booger. They then had 10 seconds to write their own word in the next square and pass the paper to their right, where their neighbor had to draw the word that they wrote. In the meantime, the student got a paper from their neighbor to the left with a word that they had to draw, so everyone had one minute to illustrate a word chosen by their neighbor. And so on until all 6 squares were filled on 7 different pieces of paper. Good times! If you want to see the other 6 pages, click here.

I am an academic Radiologist who uses comics to teach medical students and residents. View all posts by Stefan Tigges